The Stratford Shoal is a 250m long kinetic sculpture that sits at the heart of Stratford in East London. Close to the transport interchange and the entrance to the Westfield Retail Development this public realm scheme creates a colourful decorative veil screening the existing 1970’s Stratford Centre. Built in time for the London Olympics 2012 the architect Studio Egret West took a bold innovative approach to creating something that would immediately draw the eye of the tens of thousands of visitors to the Olympic Park. The finished structure supplied and installed by SH Structures is formed from a series of curved tubular steel ‘trees’ supporting a shoal of multi-coloured titanium clad ‘leaves’. The success of this challenging project very much relied on a collaborative approach with SH Structures having to work closely with the architect, engineer and clients representatives to bring the scheme to life.

Clearly this was a first even for SH Structures but our experience of dealing with projects with a multiple palette of interfacing materials enabled us to overcome the various technical and logistical challenges the scheme presented us with. The tubular steel support structures had to be carefully set out and installed due to the extensive network of underground services that had to be avoided and all the site work had to be carried out during a very short window of night time road closures immediately before the opening of the games. The leaves consisted of an internal timber and a GRP shell onto which were fixed the numerous anodised titanium sheets which give the structure its’ distinctive appearance. One of the challenges was to develop a suitable damping system to prevent the leaves from being damaged when they moved in the wind. Having investigated off the shelf shock absorbers and not finding anything suitable a bespoke hydraulic system was finally designed and installed to control the movement in excessively windy conditions. The project was completed in time much to the clients’ satisfaction and went on to win a Public Realm award. 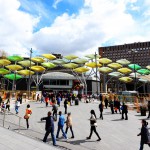 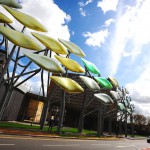 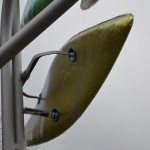 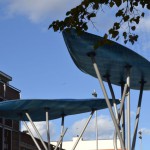 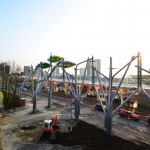 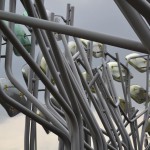