The Police Arboretum Memorial Trust was established in May 2013 with the goal to raise the anticipated £4M funds needed to build a fitting memorial to honour the dedication, courage, and sacrifice of its members, who have died whilst performing their duties. Sitting in the National Memorial Arboretum the site provides a perfect setting within the UK’s centre for national remembrance.
In 2014, after a seven-year fundraising campaign and a competition process, the Design Consortium of SH Structures, Walter Jack Studio, Ramboll UK and Rathbone Partnership were appointed to deliver the memorial which was opened in July 2021.

This was an unusual project for SH Structures as we acted as Principal Contractor for the scheme. Not only did we fabricate and instal the memorial, but we also carried out all the hard and soft landscaping for the site.

Standing at 12m high, the Walter Jack design represents an open door to symbolise the dangerous places police officers must sometimes enter evolved after extensive collaboration with police officers, staff, and bereaved family members. staff at The National memorial Arboretum and guidance from their landscape advisor.
The process started with engagement with both police officers and staff, to better understand their day-to-day lives, and with bereaved family members. This experience has, in subtle and more obvious ways, informed the design.

The apertures yielded the same number of leaf-shaped plates. These will be inscribed and given to relatives of fallen Police Officers and Staff. Thus, there will be not one but hundreds of memorials: it is hoped that owning a ‘leaf’ will give family a direct connection to the memorial at the NMA. 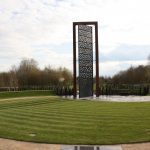 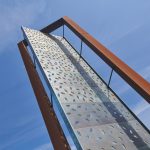 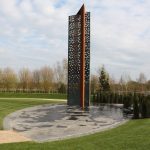 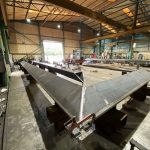 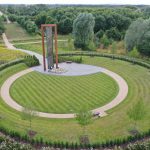 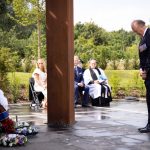 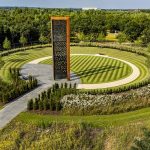 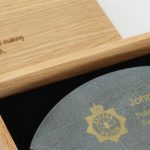