The historic tea clipper Cutty Sark was first put into her Greenwich dry dock in December 1954 after which time she was visited by over 15 million people from around the world and has become one of London’s most recognised historic sites. Sadly the years had taken their toll on the vessels iron and timber structure and without some major intervention it was determined that she would have to be dismantled and scrapped. Fortunately funds were raised and a major conservation project was commenced. The vessel was gradually stripped of her hull timbers exposing a severely corroded iron frame.

After extensive detailed survey work SH Structures modelled and detailed a new structural frame that would sit alongside the existing members and in doing so strengthening the hull. This was no easy feat due to the complex shape of the hull and the limited access within the dry dock. A key part of the Grimshaw Architects designed scheme was to see the vessel lifted off the dry dock floor by some 3m. that enables future visitors to take in the dramatic lines of what was once the world’s fastest tea clipper. SH Structures scope for this element of the works included the design of the temporary works associated with the lifting process and the jacking of the vessel onto the new support structure.

The lifting of the vessel required a rigorous monitoring process to ensure that the vessel was not under excessive stress in any areas which may result in, at worst, a catastrophic failure of the structure. A combination of strain gauges and 3d dimensional control were used during the lifting operation and in reality the vessel remained structurally sound with little or no movement recorded during the lift. Finally opened by Her Majesty the Queen on 13th April 2012 the vessel is once again open to the public and will continue to be a major tourist attraction for many years to come. 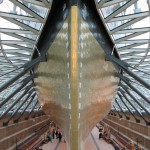 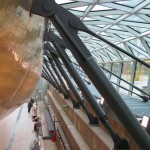 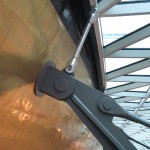 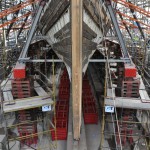 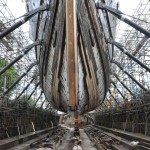 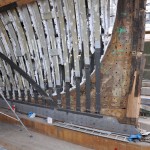