Since being completed in 2007 the tallest building in Leeds, Bridgwater Place has had ongoing issues with adverse wind circulation around the building.

Proposals for the wind mitigation scheme were developed by Chetwoods Architects, TP Bennett and Buro Happold on behalf of the owners CPPI.

Buro Happold carried out an initial monitoring to determine the wind microclimate around the existing building and then carry out the structural engineering relating to the various elements of the mitigation scheme.

SH Structures became involved during the early stages of the schemes development providing advice on technical issues and the anticipated budget.

The proposed solution was to install three large baffles on portal frame supports across Water Lane. The 6.3m high wing shaped baffles were to be clad in perforated aluminium and which would allow to both pass over the surface but also through it and thus reduce its velocity.

Installation of the three baffles and their support columns took place during a week-long road closure in September 2017.  The installation of the screens followed with the glazed canopies will lly be completed in February 2018. 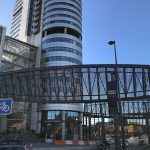 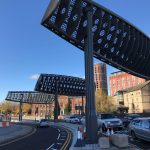 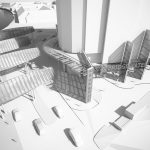 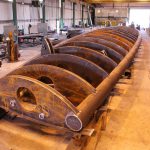 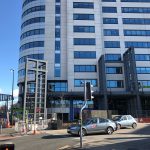 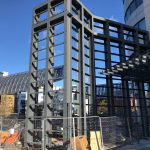 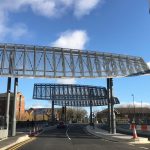 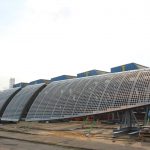 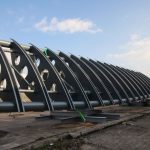